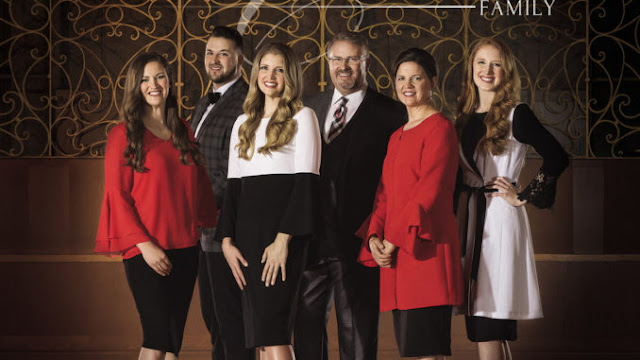 Nashville, TN (September 12, 2018) – StowTown Records artist, The Collingsworth Family, has released a new studio project, Mercy & Love. During their release weekend, they led worship at the Brooklyn Tabernacle Church in Brooklyn, New York.
Phil & Kim Collingsworth, along with their children, Phillip, Brooklyn (Blair), Courtney (Metz) and Olivia, saw their newest offering climb the iTunes charts over the weekend, reaching #2 on the Christian & Gospel chart, as well as #13 on the overall iTunes chart. While these accolades are wonderful and exciting, the real highlight has been hearing how these songs have been blessing fans.
“After months and months of very hard, detailed work, it was exhilarating to finally enjoy the release day of Mercy & Love!” exclaimed Phil. “The day included a special, sold-out release concert in Kernersville, NC and a release party there with nearly 200 in attendance. We continued the celebration with our annual date at The Brooklyn Tabernacle where we sang the new music from Mercy & Love to the more than 10,000 people in attendance on Sunday.”
For the last several weeks, The Collingsworth Family has been releasing behind-the-scenes video of each song. The response from fans has been overwhelming. In fact, their video for “Your Ways Are Higher Than Mine” stunned the group when it reached over 150,000 people within the first 24-hours. They read through each comment, all 1,300 of them.
“The feedback that we received from the thousands of folks who left us messages throughout the 14-week process of Behind the Song videos on Facebook has been so humbling,” stated Phil. “They brought us front and center with the stark realization that songs can be a life line for the listener who is going through a heart-wrenching situation. It quickly reminded us of the reason that our song selection process is so critical – a process which includes a lot of prayer and running the selections off of each of the 6 group members.”
This project was both a labor of love and a dream come true. Co-produced byWayne Haun and David T. Clydesdale, the orchestrations for this project were recorded by the world-renowned City of Prague Philharmonic in Prague, Czech Republic. Having the opportunity to work with these skilled musicians brought out the best in this multi-talented family, all classically trained musicians themselves. Each song is sung with passion and precision. While lyrics are key for them when choosing material, their vocal capabilities are second-to-none, and their stylistic versatility is evident throughout the album.
“I count myself blessed to have worked with such a talented family for so many years,” shares Wayne Haun. “Not only have I witnessed the musical maturity of the kids into adulthood, I’ve also gotten to know them like my own family. This project is even more special to me because I co-produced it with my music hero, David Clydesdale. We all made a great team, each bringing our best to the table at every point in the process.”
Phil concludes, “We couldn’t be happier with the finished product and are so thankful to the many, many talented people who gave of their amazing talents to complete a recording of this nature.” But bringing the gratitude back to where The Collingsworth Family focuses, “Most of all, we thank our Heavenly Father who truly gave the song.”
The first single, the title cut, “Mercy and Love,” is an upbeat song that celebrates our salvation through Jesus and the peace we have in that redemption. Mercy & Love is available at retail and digital outlets worldwide and is distributed by Sony/Provident Distribution.
ABOUT THE COLLINGSWORTH FAMILY:
Family group and acclaimed musicians, The Collingsworth Family, are one of Gospel Music’s most beloved artists. As highly accomplished musicians, Phil & Kim Collingsworth, along with their children, Brooklyn (Blair), Courtney (Metz), Phillip and Olivia, have mesmerized audiences all over the world. In addition to singing, the family impresses with their instrumental power: Kim on the piano, Brooklyn and Courtney both on violin, and Phil, Sr. on the trumpet. The Collingsworth Family has been honored by both fans and industry peers alike. Awards and nominations have been bestowed upon them from the Gospel Music Association, the Singing News Fan Awards, and most recently, the Grammy committee. But accolades and awards are not what drive this family’s ministry. Phil & Kim’s entire purpose is to give the talent God has loaned them back to their Creator as a sacrifice of praise.
ABOUT STOWTOWN RECORDS:
StowTown Records was founded in 2011 by Ernie Haase and Wayne Haun and then expanded in 2014 with the addition of partners Landon Beene and Nate Goble. With each person bringing their individual expertise, StowTown has become a powerhouse independent Gospel Music label. As the creative home for many of today’s top artists, the StowTown family of artists includes Ernie Haase & Signature Sound, Doug Anderson, Charles Billingsley, The Browns, Cana’s Voice, The Collingsworth Family, The Erwins, TaRanda Greene, The Guardians, Trey Ivey, The Little Roy & Lizzy Show, Tim Lovelace, Jody McBrayer, Devin McGlamery, The Perrys, Rambo McGuire, Southern Raised, The Taylors and Triumphant. Distributed worldwide through Provident/Sony Distribution, StowTown Records has garnered industry attention with multiple GMA Dove Awards and chart-topping releases from their highly respected roster of artists.

Jed And Claire Seneca Return With “Carry You Through”