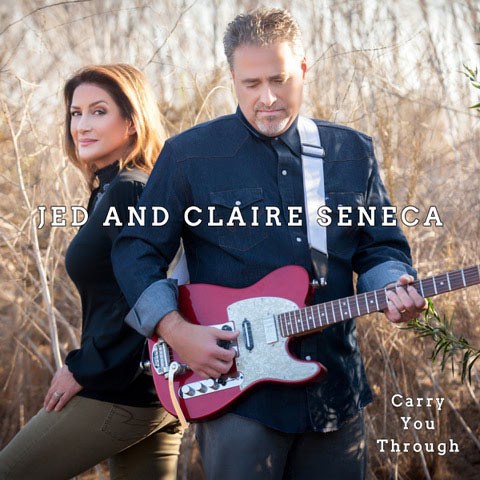 Award-winning husband/wife country duo Jed & Claire Seneca return with the highly anticipated Carry You Through, releasing October 26 on Frethouse Records, and available at leading digital outlets. Pre-sale for the record begins October 12. Produced by Jed Seneca, the collection features 11 selections marked by the common themes of faith; marriage and family; and holding onto hope in the midst of life’s challenges.
Bridging elements of contemporary and classic country, Carry You Through spotlights contributions from many of Nashville’s most renowned studio musicians, including Buddy Hyatt, piano (Toto); GRAMMY®, CMA and ACM Award-winner Brent Mason, electric guitar (Blake Shelton, Shania Twain); Bobby Terry, acoustic guitar (Alan Jackson, Willie Nelson); ACM-winner Lonnie Wilson, drums (Carrie Underwood, Tim McGraw); Steve Hinson, pedal steel (Kenny Chesney, Dolly Parton); and Kevin Grantt, bass (Garth Brooks, Johnny Cash).
With four songs co-written by Jed or Claire, Carry You Through is as personal as it is universal. “Things We Can Love Without,” “Without You” and the title cut reflect the couple’s commitment to marriage and family, spanning different seasons of life. The worship anthems “Always Have” and “Gracefully Broken,” recent favorites of Jed and Claire, are reimagined with modern country instrumentation. “Help Is On The Way,” inspired by the work of faith-based relief organization Convoy of Hope, was penned by award-winning songsmiths Matt Armstrong and Benji Cowart, along with Jessica Sirls, Pillippa Hanna and Terri Lynn Hasdorf. And “Takin’ A Stand,” written by Jed and Claire with Hunter Moore, gives voice to listeners wanting to make a difference in the midst of a constantly shifting culture.
“This new album captures the journey the Lord has had Claire and me on which has taken us from Nashville’s Music Row, to church planting across the country, and finally to the coast of California where we rediscovered our love of music and the impact it can have on people’s lives,” said Jed Seneca. “These songs are our lives, our hearts, and we are finally ready to share them with the world.”
“Whether we are leading worship at a church in Dallas or entertaining at a country music club in Orange County, it is always our desire to encourage listeners right where they are, and help to lighten their load,” said Claire Seneca. “Ultimately, through not only the music, but our words-and most importantly, our lives-we want to point people to the Hope we have in Christ.”
Jed and Claire Seneca burst onto the Christian and country music scenes in 1994 with their self-titled debut, garnering widespread acclaim for their fresh sound and polished stage performances. Demonstrating cross-generational appeal, their song “The Real True Love Can Wait” became an anthem for the teen purity movement. Takin’ A Stand, released in 1996, continued to place them at the forefront of the burgeoning Christian country genre, and they were named Vocal Duo of the Year by the Christian Country Music Association. In the years following, Jed and Claire focused on church planting, where they were instrumental in the development of congregations in Indianapolis and Austin, among other locales. The couple have two grown children and reside in Orange County, California.