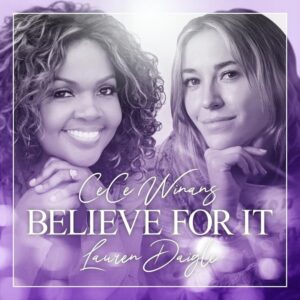 CeCe Winans releases the newest version of “Believe For It” featuring Lauren Daigle. The fan-favorite song about belief and trust is completely re-imagined as Daigle and Winans combine their illustrious vocals.

As the 12 time Grammy winner reflects on the achievement of her 11th solo album she has this to say, “I’m thrilled with the success of BELIEVE FOR IT because I think the message of the song is more important today than ever before. I celebrate reaching Top Ten and the millions of views the videos have received – not because it elevates me in any way – but because the songs promote the truth of the Gospel and the hope we have in Christ.”

“Believe For It” is the chart topping title track off of Winans’ most recent live album and held the coveted #1 spot on the Billboard Hot Gospel Songs Chart for 10 consecutive weeks. It has also broken the top 10 of numerous other Billboard and Mediabase Gospel and Christian charts.