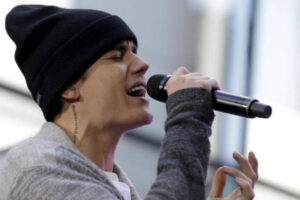 Pop star Justin Bieber was the featured guest on “SNL,” where he performed his latest single “Holy” with Chance the Rapper.

Following an introduction by host Issa Rae, the 26-year-old took the stage, which was set as a rural church with an illuminated cross at the center. Bieber’s vocals took the mainstream audience to church as he began singing the tune with his hand over his heart.

“Holy” is a love song that celebrates faith while speaking of the benefits of commitment.

Also featured on “Holy” is Chance the Rapper, whose real name is Chancellor Johnathan Bennett. The Chicago native is known for incorporating his faith into his music and in the past has said he considers himself a “Christian rapper.”

“The first step pleases the Father/Might be the hardest to take/But when you come out of the water/I’m a believer,” he rapped on “SNL.” “Gotta clean it up/Formalize the union in communion/He can trust/I know I ain’t leaving you like I know He ain’t leaving us/I know we believe in God and I know God believes in us.”

As the song came to a conclusion, Bieber belted out the final chorus and was overcome with emotion, which left him bent over with his microphone in hand until Chance the Rapper reached over to him and supportively patted the pop star on the back.

Watch The Video Below

Benue State youth, set a record, which captured & attract Global attention, through changing the pattern of protest as prayer walk.