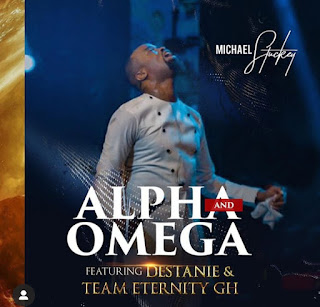 Christmas kicks off with high praise to the “Alpha & Omega” from American Gospel Artist, Michael Stuckey as he releases the visuals to his praise thumping version of the popular worship single.

“Alpha & Omega” – The longest running song of The 21st Century first originated from Zimbabwe and was brought to the attention of the world by Grammy Award winner, Israel Houghton & New Breed in their 2005 Alive in Africa album.
Teaming up with Ghanaian Producer, Byte Kofi and US producer Kariji Jones, Michael Stuckey has revamped and added a catchy twist to “Alpha & Omega“ featuring American singer, Destanie (USA) and Ghana’s own Team Eternity.
The video was recorded Live in Ghana, a single off his forthcoming album..
Africa get ready cos he’s coming home with this album.
Michael Stuckey is presently working on his amazing “Live in Ghana” album which he recorded late July 2019 featuring Nigeria’s own Prospa Ochimana and KI. He also collaborated with South Africa Idol star/Gospel Artist, Martin PK.
What’s next after his latest song “Alpha & Omega” we asked Stuckey in a interview,  He stated that he just wanted to create songs that would allow any individual to reflect on God, not just the common way because God is so diversed and his presence can appear in many different ways.
Watch Video Below;
Related Topics:
Up Next