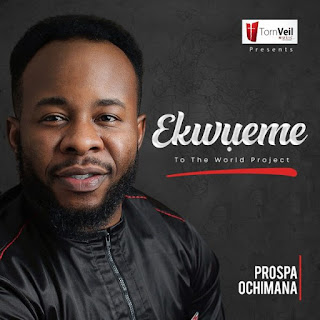 Finally out of the most anticipated album project is out “Ekwueme” crooner, multiple award-winning music minister and Gospel recording artiste of Tornveil Music International, Prospa Ochimana, has released a wonderful body of work tagged: Ekwueme To The World containing heartfelt worship, unrestricted praise and great songs all round.
The album consist of eleven (11) tracks including Prospa’s previously released hit singles: “Ekwueme” the song that has so far garnered over 27 million Youtube views since its release 2 years ago, “The Great I Am” (about 4 million Youtube views), “You Are Jehovah“ (2 million Youtube views) amongst other powerful songs, have now been packaged into one must-have album.


For Your Gospel Music Promotion,Upload and other enquiries Whatsapp/Call: 08093299543

This power packed project will bless your life and stir up the atmosphere of Jesus in your home, car, office and everywhere it is played.
You can get it from any digital stores via links below:
APPLE MUSIC | iTUNES | SPOTIFY | AMAZON | BOOMPLAY

The album is also available at all Dunamis International Church locations in Nigeria.
Album Tracklist