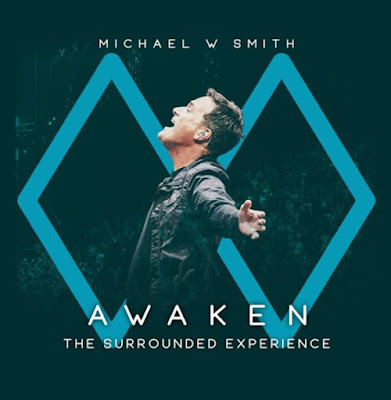 Inspired by his Good Morning America-featured live worship album Surrounded, which is nominated for Best Contemporary Christian Music Album–his eleventh GRAMMY nomination, Michael W. Smith hosted “A Night to Pray, Worship and Be Awakened” at Bridgestone Arena in Nashville, TN last August. The energy, passion and unity of the event was captured as it happened on AWAKEN: The Surrounded Experience releasing Feb. 22 from Rocketown Records and The Fuel Music. The album features the multi-Platinum, three-time GRAMMY® Award-winning artist along with special guest CeCe Winans and the voices of 14,000 that attended the evening.
“The night was beautiful. I remember thinking, ‘This is what Heaven will look like.’ A picture of unity, with all colors, ethnicities, denominations and ages joined together in worship,” shares Smith in a Parade exclusive. “I’m still hearing reports of lives changed, commitments deepened and people empowered in a new way. We may each have different stories, skin and songs, but we all share His same Spirit.”
“This live recording captures a gentle and uplifting spirit that blossoms into an anthem of exaltation,” says Parade’s Laura B. Whitmore regarding “Waymaker (feat. Vanessa Campagna & Madelyn Berry),” the first song from AWAKEN releasing today to digital retail and streaming outlets everywhere. “Vanessa Campagna and Madelyn Berry’s vocals soar above a choir of joyful voices and a rocking beat.”
Parade.com, the online destination for the most widely read magazine in America, also suggests people watch the video for the album’s first radio single “Surrounded (Fight My Battles)” to “really get a feel for what the live experience was like.” First recorded by Smith in an intimate setting of 400 people on last year’s acclaimed Surrounded album, the song is energized on AWAKEN in an arena filled with enthusiastic worshippers.
Prior to the “Surrounded” and “Waymaker” premieres, Smith released his version of the GMA Dove Award-winning Song of the Year, “Reckless Love,” from AWAKEN on video as a special gift for fans on Christmas day. The featured video at https://youtube/TJdGs_nsyi0 first aired as part of the Trinity Broadcasting Network’s “Surrounded” special that was broadcast into 175 countries to millions of people around the world.
The full AWAKEN: The Surrounded Experience track listing follows:
Taking his new music and fan favorites on tour in 2019, Smith will be featured on the annual, Compassion International-sponsored “The Roadshow Tour” launching Feb. 22 before joining Christian music supergroup, Newsboys United, to co-headline the “Surrounded & United: The Tour” beginning April 10.
On April 30, Smith will return to Bridgestone Arena to be honored by his peers during the “35 Years of Friends: Celebrating The Music of Michael W. Smith” event. Featuring an all-star line-up of artists leading many of Smith’s 32 No. 1 hit singles, the event includes performances by Amy Grant, Brian Littrell (Backstreet Boys), CeCe Winans, The Gatlin Brothers, Jars of Clay, Jason Crabb, Jim Brickman, Lee Greenwood, MercyMe, Natalie Grant, Newsboys, The Oak Ridge Boys, Randy Travis, Rascal Flatts, Ricky Skaggs, Russ Taff, Sandi Patty, Vince Gill, Wynonna and many more.
After 35-years of music, the iconic, 2019 GRAMMY-nominated Michael W. Smith released in 2018 three albums (the aforementioned Surrounded, the USA Today, Yahoo! Music and Billboard-acclaimed studio album A Million Lights, and the FOX & Friends-featured Lullaby) and his first two children’s books (Nighty Night and Good Night and Let’s Get Ready for Bed).
Last year also marked the launch of Smith’s new children’s brand, Nurturing Steps, sold-out “Christmas” and “Surrounded By A Million Lights World Tour” events and worldwide-watched performances honoring the lives of his friends Rev. Billy Graham and Pres. George H. W. Bush at their respective funeral services. Smith was further tapped for appearances on ABC’s “CMA Country Christmas” and during Celebrity Fight Night in Italy with Andrea Bocelli, Josh Groban, Reba McEntire, Kristin Chenoweth and more.
About Michael W. Smith:
Michael has been releasing new music regularly and performing around the world to sold-out crowds for the last 35 years. During his storied career, he’s written 32 No. 1 singles, been honored with three GRAMMY Awards and 45 Dove Awards, was inducted into the Gospel Music Hall of Fame and has sold more than 15 million albums. His most recent studio album, A Million Lights, and worship album, Surrounded, have together become his 30th and 31st Top 10 hits on Billboard’s Top Christian Albums chart, more than any other solo artist in history. He’s also given back to the global community. Michael has raised funds to battle AIDS in Africa; started Rocketown, a safe haven for young people in Tennessee to meet and find hope; and has helped more than 70,000 children through Compassion International. He has also written several best-selling books, including Old Enough To Know and Friends Are Friends Forever. He and his wife, Debbie, have five children and live in Nashville.
About The Fuel Music:
Established in 2008, The Fuel Music & Management, LLC, is a leading artist management and artist solutions company that independently distributes music internationally. Based in Nashville, TN, the Fuel team brings nearly 70 years of combined music industry experience in record label operations, major label distribution and marketing, and artist management for artists ranging from upstart bands to GRAMMY Award-winning, multi-platinum artists. More information on the company can be found at www.thefuelmusic.com.

Margaret Feinberg: Scripture Is My Food for Thought