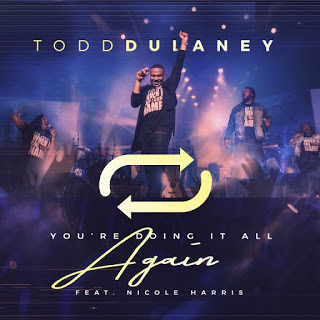 Todd Dulaney is back and ready to do it all again with his new record, “You’re Doing It All Again”. While Pre-Sales are now available, Dulaney’s new anthem will be available everywhere November 1, 2018.The Grammy Noimnated worship artist has been traveling to Africa a lot over the past couple of years, and decided to record his latest single Live from Cape Town in South Africa. He actually recorded it at the same venue as the iconic “Alive in South Africa” record by Israel Houghton, and is the first worship artist since Houghton to record there.Due to the exponential growth in support of his ministry in Africa and the high demand that the support brings, Todd’s new album, slated to be released in the 1st quarter of 2019, was recorded Live in Africa. After releasing the album, he will launch a tour in Africa. “Some places you just know are apart of your destiny,” says Dulaney. “The motherland is home for me, not just physically, but spiritually as well. It’s where God has assigned me in this season. I can feel it every time I step foot on the soil.”Once again, “You’re Doing It All Again” is currently available for Pre-Sale, and will be available everywhere November 1, 2018. For more info, please visit www.ToddDulaneyLand.com. For all media inquiries, please contact me via the info provided below.Have a Blessed Day!

Brief history About Todd Dulaney.Todd Dulaney is a former Professional Baseball player from Chicago who was drafted by the New York Mets before trading his baseball bat for a microphone. He was nominated for Gospel Album of the year at the 2017 Grammy Awards, and garned 2 nominations at the 2018 Dove Awards for his current album, Your Great Name. Known for penning anthemic songs such from “Pulling Me Through” to “Victory Belongs to Jesus” and “Your Great Name”, Todd Dulaney continues to bridge the gap between cultures, uniting people all over the world through the heart and sound of worship. When Dulaney’s not on the road, he resides in the suburbs of Chicago, IL with his wife and their four children.