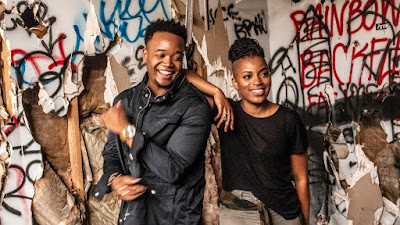 Recognizing October as Bullying Prevention Month, Atlanta-based hip hop artist God Frame takes on the tough topics of cyberbullying and suicide in the new music video for his song “Forever Always” feat. Chadaé. The music video premieres today, Fri., Oct. 12.
In the emotional clip, a young woman is attacked in a group chat via a series of texts. The antagonists insult her about her weight and style of dress and one even suggests that “she should just kill herself.” Saddened and depressed, the woman attempts to take her own life.
GodFrame says the song originally released in 2017 is based on personal experience. “When I wrote this song, I imagined God speaking the words to me because I was the one dealing with suicidal thoughts,” he reveals. “But ever since we released the single, I’ve seen so many comments and DMs from people telling me how much the song meant to them. One girl told me that she could hear the Lord’s voice telling her to keep living on a day when she felt like ending her life.”
The artist who released his album Hello Jesus in August continues, “That’s why this video matters. The teen and young adult suicide rate is alarming and heartbreaking. It really hit me hard earlier this year when I heard about a junior high school student who committed suicide after making a pact with her friends – all because they were tired of being bullied. I don’t think people realize how much weight their words carry, even when they’re shared via text message or DM. This stuff matters.”
GodFrame hopes the visual will make an impact. “I’m praying to see testimonies in the comment section. We’re encouraging people to share the video with their friends using the hashtag #ChooseKindness in honor of Bullying Prevention Month. I don’t know how many people it will reach, but if we can help save one life it’ll all be worth it.”
A former youth pastor for Grammy-award winning gospel artist Smokie Norful’s Victory Cathedral Worship Center, GodFrame released his debut album Freedom in 2008, his sophomore set You Are Infinite in 2010 and All My Friends – EP in 2014. The artist whose name means “made in God’s image,” fell in love with music at an early age. He began beat-boxing and drumming on pots and pans as a child and later learned to play the piano and saxophone. But as his talent for music expanded, so did his love for God.
Watch video below
Related Topics:
Up Next